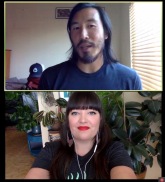 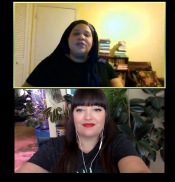 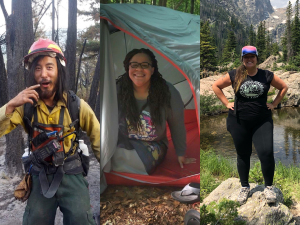 Quicksand, sketchy hitchhiking and a cringeworthy mistake you will never make after hearing this. In this special storytelling episode, we’re taking the Unlikely Hikers feed and bringing it to life with stories from Latria Graham, Tyler “The Prodigy” Lau and your host, Jenny Bruso.

Latria Graham (center) is a journalist, and fifth generation South Carolina farmer. Her work stands at the intersection of food, social justice, sports and culture. She’s written longform pieces about everything from farming to NASCAR. She is a graduate of Dartmouth College, and later earned her MFA in Creative Nonfiction from The New School in New York City. She is a three-time Best American Sports Writing notable for her stories on athletes in places of tension—primarily Standing Rock, ND and Flint, MI. She received a Bronze level CASE Award for her reporting on immigration policy that stemmed from 2017’s Executive Order 13769, often referred to as the “travel ban.” Her work has been featured in the NYT, LATimes, The Guardian, espnW, Southern Living, and Garden&Gun. You can find more of her work at LatriaGraham.com| ig: @mslatriagraham

Tyler “The Prodigy” Lau (left) hails from the US and Hong Kong. He didn’t grow up appreciating the outdoors, but that changed as he got older and started taking jobs doing trail maintenance, rehabilitating fragile habitats and fighting wildfires. At work he found himself experiencing discrimination and sterotyping, which openend his eyes to the diversity problem in the outdoors. He wanted to be a part of making it more accessible to all. In 2018, he became the first Person of Color and first Asian-American to complete a Calendar Year Triple Crown which is the completion of the Pacific Crest Trail, Continental Divide Trail and Appalachian Trail in one calendar year. He used the hike to promote and fundraise for organizations working on diversity efforts in the outdoors. | ig: @hikingprodigy

You can listen on Apple Podcasts, Spotify, Google, Stitcher and many other podcast apps. You can watch the episode on YouTube. Please subscribe, rate us 5-stars and leave a good review!

Creating a podcast takes an extraordinary amount of time and we are currently unsponsored. Please consider making a donation. Sharing goes a long way, too xo