A few days ago, journalist Tanya Gold wrote an op-ed for London’s The Telegraph about Nike’s new plus-size mannequins at the London flagship store in an article titled, “Obese Mannequins Are Selling Women A Dangerous Lie.” It’s pure click-bait, but it worked. The Telegraph isn’t the most credible news outlet, but it’s highly circulated and my social media feeds were flooded with fuming posts about Gold’s baseless fatphobia over these plastic molds shaped in the median size of most American women. In the article, she describes the mannequins as “immense, gargantuan, vast. […] She is, in every measure, obese, and she is not readying herself for a run in her shiny Nike gear. She cannot run. She is, more likely, pre-diabetic and on her way to a hip replacement. What terrible cynicism is this on the part of Nike?”

The mannequins are a size 16. I’m a size 20. I’m a hiker, backpacker and group hike leader. I dabble with kayaking, rock climbing and running. Over the years, I’ve found an incredible community of plus-size athletes and outdoorspeople: Mirna Valerio, Latoya Shauntay Snell, Sam Ortiz, Tasheon Chillous, Ashley Manning and Sarah Robles, just to name a few of this growing community representing body diversity in athleticism and recreation.

Everyone has rushed to debunk Gold’s ignorant statements, understandably so. We’re already working so damn hard every day to be seen and validated in our sports and livelihoods and she just tried to paint over us in one broad stroke––feels more like a yawn––that has now been clicked on hundreds of thousands of times, garnering media attention from celebrities and bigger news outlets. This is dangerous, even if it’s so basic it’s nearly boring. Still, there’s more to this than meets the eye.

While we deserve representation and, yes, I’m grateful for more cute plus-size activewear options and the acknowledgement that mannequins can also promote wack-ass messaging, I’m concerned with our desire to distance ourselves from the fat person Gold describes. Does that person deserve this kind of vitriol? Our defense of our own fitness triumphs and healthy lifestyles reinforces this othering. There’s a moral value we’re placing on physical ability and health that does all of us a disservice and it’s ableist.

Of course, we deserve respect, recognition and clothes that fit, but not based on being the “good” kind of fat person instead of the “bad.” All bodies are worthy.

I’ve got compassion for everyone who feels further marginalized by stereotypical drivel like Tanya Gold’s. I, too, want to give her a big fat middle finger for it. Dominant culture tells us to lose weight and exercise, but they don’t want to see us do it. Plus size active-wear is really only now becoming a thing. People don’t want to see us outside of before-and-after photos and what we say only matters if we’re sorry about being fat. In a recent blog post I wrote, “fat people are supposed to act like their bodies are a secret that can somehow be kept from others. We are supposed to make ourselves as small as possible as we move through places designed to exclude us. We are expected to apologize for the ‘extra’ space we take up. We are supposed to quietly endure. After all, we are the ones in the wrong for existing outside of societal expectations.”

To advocate for ourselves is a threat and treated as such. Apparently, this extends to mannequins.

No one’s fatphobia surprises me. It’s everywhere all of the time, especially in fitness and outdoor culture, and most certainly in the clothing and fashion industries, but as I read Gold’s piece for a third time, I just couldn’t help but wonder, “who the hell is Tanya Gold?”

“I would never want a woman to hate herself for what she finds in the looking-glass. But to have control over your body you must first know it; to be oblivious is not to be happy, unless you are a child.” Another quote from Gold’s Obese Mannequins op-ed.

Control. It’s always about control. Like we’re all spinning out of control if we aren’t prescribing to what dominant culture is selling and that isn’t limited to bodies. We aren’t worthy of [blank] until we get [blank] under control.

Just one Google of Tanya Gold had me lying in bed in the middle of the night scrolling to the center of the earth. I went deep. Like, 15 years deep. What I found didn’t shock me, but it made me really sad. And pissed.

I understand when opposing forces in one’s own head are duking it out for survival. I understand being a different person from one day to the next as I figure out just who the fuck I am in the world.

You can be a mess and still produce great work without throwing people under the bus to exalt yourself from other fat people. Tanya Gold threw fat women under the bus to deflect from her own struggles. It’s shitty and painful and sad.

She’s still an asshole for it.

She’s had the experience of being a fat person and she was still able to write, “fat-acceptance is an artifice of denial – they are fat because they do not accept themselves – and a typically modern solution to a problem, if you are a narcissist. It says: there is no problem. Or if there is, it’s yours, not mine. As soothing as that may be to hear, your organs and your skeleton will not agree.”

Tanya Gold can hate herself into dominant culture all she wants, but I’m not going with her.

She’s super active on Twitter, where she sports a profile pic of her smoking. Note: I really don’t have a problem with smoking. In fact, I think people can be assholes about condemning smokers, but, girl, C’MON! Most of her recent tweets are about the cruelty of abortion bans. So, she understands in some way that women are capable of self-determination. Strangely, she has somehow been able to block or delete anything about her piece pinging back to her twitter account.

A spokesperson for Nike told “Good Morning America” that their mission is to “serve all athletes” regardless of size. “We launched the Nike Plus Size collection in 2017 – a collection crafted to ensure the perfect fit at every size. To showcase inclusivity and inspire the female consumer, we launched Nike Plus Size mannequins in select stores in North America in 2018 and as part of the recent launch of the new ‘Women by Nike’ floor in NikeTown London […] We continue to listen to the voice of the athlete and know that the female consumer wants to see a diverse and inclusive range of product to serve her sporting needs.”

I’m not giving Nike any cookies. Going up to a 3X doesn’t “serve all athletes,” but it’s a start and, y’all, I’m dying out here for just a little bit of style with my activewear. Check out my Plus-Size Activewear resource guide to find clothing up to 6X and learn more about why the right clothing matters. 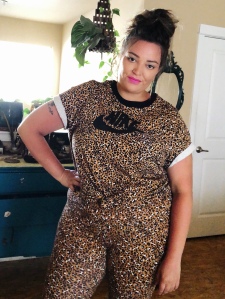 I received this outfit (above) in the mail the same day I saw the article. I’d just gotten home from some blissful time in the woods where I got to be in my body. I did the hardest hike I’ve ever done, Elk Mountain in the Oregon Coast range. It’s the kind of hike that is so challenging––a 2,000 foot gain in 1.5 miles, relentless scree, giant rocks and steps so big I had to physically lift and lower my body repeatedly––it makes me question all of my life’s decisions or, at the very least, why I didn’t just go lay by a river instead on a 90-degree day. Still, I did it. This body does amazing things for me.

IF YOU USE OR ENJOY THE CONTENT I CREATE, PLEASE CONSIDER MAKING A DONATION TO SUSTAIN MY WORK. THANK YOU FOR THE SUPPORT!