I was nine years old the first time a boy pushed himself onto me. He was fourteen, my best friend’s stepbrother. I thought he was cute and I tried to tell myself that him wanting me was a good thing. I was supposed to want this, instead I felt humiliated and violated. He didn’t hurt me, he just kept kissing me and telling me how much he liked me. No big deal, right? A cute boy likes me! I was confused over why I didn’t want to tell even my best friend about it.

The following year, a boy in my fifth grade class spent two days sneaking up behind me and grabbing my already developing breasts at random. Everyone thought it was hilarious, so I tried to find it hilarious, too. Even now, I feel the pinpricks of shame, beginning at the base of my neck and traveling down my spine. My teacher, Ms. Traum, finally caught onto it and took me aside and asked what I would like to do about it. “Nothing,” I said. She seemed to accept my response, but later that night, she called my mom and told her about the whole thing. I didn’t grow up feeling protected by my parents, so it just felt like more humiliation and shame on my ten year old shoulders. I told my mom I was fine, which would be my response to these types of things for the next ten years. I assume Ms. Traum talked to this kid because he didn’t do it again, but did she call his parents? She never once addressed it to the class, probably to protect my feelings, but what about telling the other boys this behavior is completely unacceptable?

When I was fourteen, Mr. Miranda, my eighth grade science teacher, was rumored to be a pedophile. He regularly made inappropriate comments to the girls in his classes, myself included. At the end of the year, we were assigned a big project of our choice to present to the class for our final grade, which would be filmed in front of the class and later shown. I don’t remember why they were filmed and then shown when we already witnessed the presentations “live.” Seems like a strange process now. Mine was the last one. As we watched the presentations on film, I walk into view and at first it appears as though Mr. Miranda is trying to adjust the camera angle, but to my horror, he puts it squarely on my breasts and zooms in and out throughout the entire presentation. The other kids laughed at first, but after a few minutes as the camera continued to zoom in and out over and over only on my breasts and torso, the laughter petered out and a collective sort of what-the-fuck charge was in the air. Mr. Miranda tried to make it sound like it was an accident, the camera kept slipping. The camera didn’t “slip” on any other girl and he didn’t turn the video off despite this obvious horror. My face showed only one time during the entire presentation, in the beginning when I walked on screen. A girl even said to me later I should tell the principal. I told no one.

This is a very small sampling of the violations I experienced as a young girl. I want to show how early this silence is instilled in girls and female-assigned people (meaning, people who were assigned “female” at birth who may grow up to identify otherwise). As well as how early boys, who were assigned “male” at birth, learn they can have access to girls’ bodies with a likely guarantee of their silence. Saying “no,” or advocating for myself in any way didn’t seem like an option in any of the situations I described. Aside from Ms. Traum’s half-assed attempt, no one advocated for me either. No one told me to be silent, just as no one likely told these boys (and a man!) they could do these types of things. No one told me it was wrong either. There is something in this culture, from the way we are raised to the media we consume, giving us the idea that this is how things work. I was supposed to want to this kind of attention, and whether I actually wanted it or not, I was supposed to keep quiet about it.

Women and female-assigned children are reared to expect and accept this treatment. Is anyone really still wondering why women rarely report their rapes?

This country, the United States of America, just elected a known sexual assaulter and alleged pedophile as the Commander-in-Chief.

I spent the prior week and day of the election cleaning and combing through my entire house. It was the only self-care my being kept pointing me to as I tried to deal with the anxiety, depression and trauma triggers this election has caused by the onslaught of attention to Donald Trump’s horrible antics and the the mere fact that it’s somehow being accepted by so many. (And to think I had no idea yet just how many people were accepting it.) Projects and crannies and things I’ve gone blind to from seeing every day in the exact same way became dazzlingly clear to me. I am messy, I am forgetful. My home often looks like my depression. Right now, my house looks like the love, support, soothing and clarity I’ve been looking for. I wish it could be enough.

The day of the election, my certainty about the seeming impossibility of Donald Trump being elected wasn’t as strong as it had been and as I sat around with old friends I’ve loved for a long time and the election map became a giant red sandwich with the teensiest blue bread, my old trauma body pains began throbbing. The sassy and emotionally fired up banter from earlier turned into stunned silence, punctuated with “I’m so scared” and “I was so wrong” and “I knew we were living in a bubble, but…” The realization that I missed the fucking mark in ways bigger than my imagination was not so much sinking in as it was slapping me across the motherfucking face.

I knew we were living in a bubble here in Oregon, specifically Portland, Oregon, and any other day of my life I would say I keep myself aware, informed, actively engaged but always wanting to do more. Sometimes, my mental health doesn’t let me, but not always. The fact that I do not know a single person, family included, who voted for Trump really should’ve been my first clue I wasn’t using my voice and resources where they were truly needed. Instead, I let it comfort me. I don’t know a single person voting for Trump. That’s a good thing! This thought process is totally WRONG.

This whole story is a mess, I’ve lost my graces and pretty words. I don’t normally just write something and post it right away, but I need to get this shit out and I feel a distinct responsibility and need to have this conversation with anyone who might come across this blog.

When you vote for a candidate who denies the rights and humanity of other people, you are enacting oppression. Yup, even if you love them. Even if they’re your child. There are NO excuses. I want to talk about how voting for Trump for fiscal reasons is actually totally fucked, but I am losing my words and I have to leave for work in fifteen minutes. 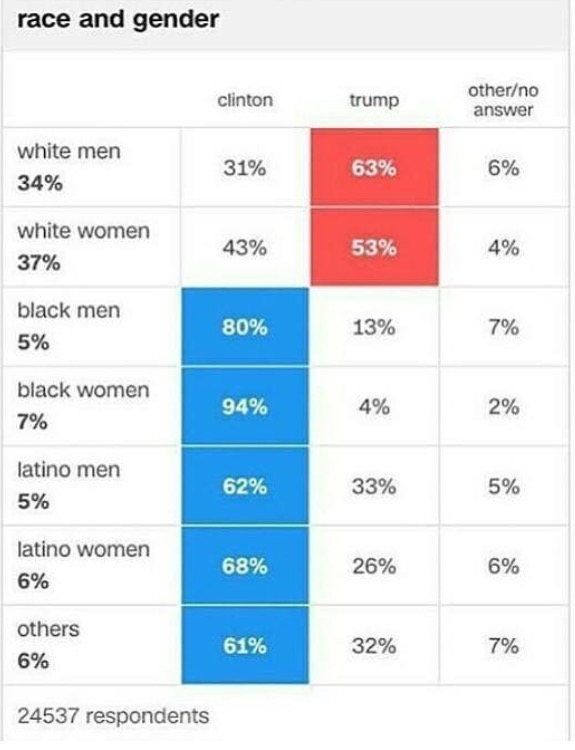 White people, we did this. I know that is going to hurt and/or be immediately rejected by some of you, but it’s the truth. This whole culture is built around white fragility and the silence of people of color and oppressed people. And yes, I can say I experience oppression on multiple levels, but the whiteness of my skin will always be the preferred currency in this country, whether I reject it or not. We need to call things what they are. We need to step up to the plate in bigger, bolder ways. New ways we don’t even know yet, but will create. We need to sacrifice our comfort and look beyond what’s right in front of us in ways we haven’t before. The media is finally talking about racism more, but it will never be enough. When the media says things like, “women and minorities,” they are saying “everyone but white men,” and yet white men and white people, in general, are so terrified of and enraged by being called out in that way we tiptoe around it like it’s dad’s bad mood.

I know a lot of you reading will think, “well, I didn’t do this…” Nope, we did. Being a “good person” isn’t enough and it never was. It isn’t enough to not act out racist things. It is our job, every individual white anti-racist person, to interrupt racism every time we see it happening. Whether, it’s your coworker who you’ve written off as hopeless, or grandma who “isn’t racist” but still voices stereotypes and wrong terminology. I get not wanting to start trouble, but guess what? We’re already in trouble. Another thing, when you bear witness to a person of color’s story: believe them. It’s not your job to negate, to question or to write-off because you have never performed or witnessed A or B action they’ve described. You have nothing to gain by writing someone off unless soothing your own mind is your most pressing concern. If so, that’s racist. It’s projecting. It’s centering yourself in their experience and it’s counterproductive. The only acceptable response is to provide support. Example: “I’m here for you, can I provide support in any way?” “I’m so sorry this happened. Would you like me to talk to the person who did that?” Listen to people of color, believe them, be there for them, be of service to them, provide resources, use your white privilege to speak up when it might be dangerous for them to or in situations where they won’t be listened to. Never expect a person of color to educate you on the issues facing them, educate yourself. You may find that you have done some of the things you are learning about and now you will have the tools to not do them again and be able to show other white people the way. When you fuck up, don’t make excuses. Say “sorry” and detail how you are going to do better. White guilt is real, but it’s often really annoying and counterproductive. Don’t expect anyone to validate and make you feel better when you’ve screwed up. Also, sometimes our friends and family of color are going to say angry shit about white people and make jokes at our expense. Don’t you ever blow off steam by making fun of the things that hurt you because sometimes you just need to laugh instead of cry? This is not your time to prove what a good ally you are or interject your opinions about how racism affects all of us, or express hurt feelings. Bluntly, fuck our feelings. Seriously, motherfuck them.

I am committed to doing better, are you? Feel your feelings—-trust, I really wanna talk about my fucking feelings, but I’m going to in another post soon—-and then figure out how you are first going to take action.